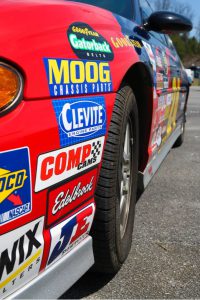 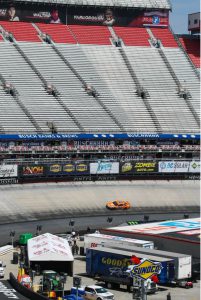 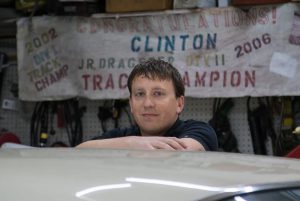 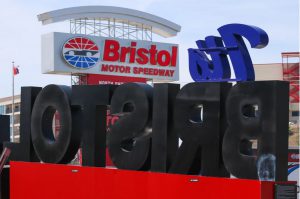 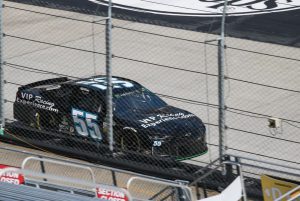 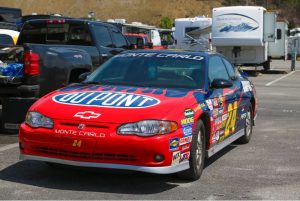 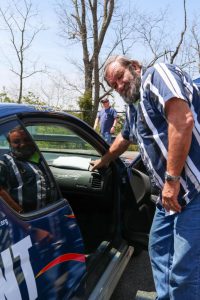 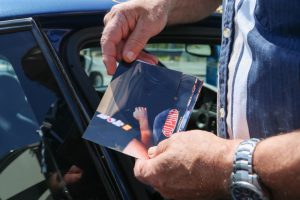 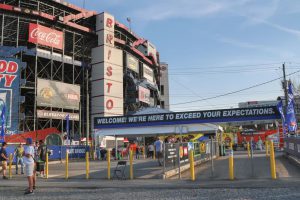 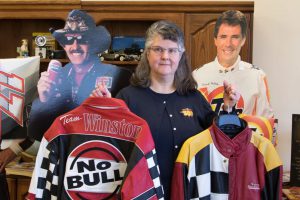 What They Bring To Bristol:

The Fan Experience at

In “The Last Great Colosseum,” every fine tuned detail hinges on the 30-degree slope of rubber christened concrete. For Bristol Motor Speedway, the most minute of detail fails to go unnoticed: from campground golf carts and routine maintenance of hundreds of bathroom stalls, and to the multimedia online presence of website slow motion graphics. To the sport itself, close attention and maintenance is heeded on everything including the emergency engine failure plans on upwards of 100 top performing, multi-million dollar racecars. This is NASCAR. The smell of exhaust and burnt rubber accompanies the rumble of aluminum benches and chewed tire particles. Crowds of expectant fans wait for the growl of a passing 130 mph car to rattle through their ribcages. It is a rush of constant adrenaline for 500 laps on the panoramic half-mile. For some, it is more than a sport. It is ethnology.

At Bristol, it is these fans that make the experience. Bruton Smith, owner of Bristol Motor Speedway since 1996 strives to maintain a close and personal relationship with fans. In 2017, Bruton welcomed fans to the April 23rd race by stating, “…what makes Bristol Motor Speedway special has nothing to do with the construction or how the staff and executives at Speedway Motorsports Inc. operate the World’s Fast Mile. What makes the Colosseum roar back to life, year after year, is you, our fans.” Bruton’s stance of fan orientation is backed by BMS’s motto “exceed expectations,” which can be seen adorning the welcome gate entering the track grounds. During the race season, the track hosts “Tailgate Party,” a concert that attracts largely know country and classic rock artists. The fan orientation is so elemental to BMS that they have owned and operated the world’s largest outdoor video display since 2016, known as “Colossus TV.” Consisting of four large screens, it works as an acting display and method of advertisement for their sponsors. It was a featured incentive at the monumental Battle at Bristol, an NCAA football game between the Tennessee Volunteers and the Virginia Tech Hokies. The game broke the attendance record for any NCAA game with 156,990 fans, many of which are not coincidentally NASCAR fans.

Clinton Snead, a liaison between Joe Gibbs Motorsports and Toyota Racing Development, Bristol native, and lifetime fan of NASCAR says that it is “nice to race at Bristol because you are racing for something extra, something special. That is something unique compared to the other 20 tracks we [Joe Gibbs racing team] go to… From a fan’s standpoint, it’s different. We go to Kentucky, Kansas, Texas; they call them cookie cutter tracks because they are pretty much the same. Bristol is just more exclusive, and driven towards fans. Some tracks are just in it for the television money. They aren’t super concerned how many show up to the race. Bristol is really for the fans’ experience.” Even drivers find a thrill in the steep incline and 360 degree fan seating. Cup driver Clint Boyer states, “If a fan asks me, where should I go? It’s Bristol every time.” Fellow Cup driver Kyle Larson has been quoted saying, “[Bristol] is the best track we go to, most exciting place and I love coming here.”

Bruton also maintains a relationship with sponsor Food City to customize Food City Family Race Night, one of the top premier pre-race events in NASCAR. This free event allows fans to preview hot rod and muscle car shows, racing simulators, free food samplings, concerts, souvenir booths, and driver autograph sessions. Over the years, this event has raised over $500,00 for local nonprofits and charities. Pam Murray, a charter and current member of the Food City Race planning committee recalls that her favorite part of the racing season is “the level of excitement and anticipation among the fans…the best people in the world are race fans and those fans are our shoppers. Food City Family Race Night (sic) is yet another way for Food City to serve our community and our customers.”

The close and tailored experience causes a national migration back to Bristol every year because it gives fans an opportunity to commit to the sport, and show their support for their favorite drivers. This extended loyalty has given every fan a unique experience to date. Longtime fan Charlie has supported NASCAR every since he moved to Bristol 24 years ago. “I never liked NASCAR,” he recalls. He changed his mind after the preacher at his church mentioned a driver in a sermon that always has scripture open on his dashboard as he drives. The driver was Jeff Gordon. He continues by saying that Gordon won the first race he watched from his living room. Gordon’s first declaration from the Winner’s Circle was a short prayer, which changed Charlie’s mind about drivers and NASCAR. Today, he shows his steadfast support for Gordon through his limited edition Monte Carlo, which is one of 2,424. He bought the car and modified it into an exact replica of Gordon’s signature DuPont sponsored Chevy. Charlie gently lifts a leather cover on the dashboard interior, revealing Gordon’s autograph. “I have never been a fan of no one’s but Jeff Gordon,” he proudly exclaims.

Stories of long-time driver dedication are not uncommon at Bristol. David, a 23-year veteran fan from London, Kentucky has only supported Bobby Labonnte, and Martin Truex Jr. after Labonnte’s retirement. When asked what his favorite thing about Bristol is, he replies, “The race is fabulous. The whole experience is never boring.” Another such story comes from Shelly, a Kentucky native who has traveled to Bristol every year for the spring and fall races since 2012. She chooses Bristol even though Kentucky Speedway is close to her home. “Bristol is not boring, there is never a bad seat, and the people are so friendly.” Here at Bristol, she had an experience she will never forget. When Jeff Gordon announced his retirement, she was devastated. As a steadfast fan, she was hesitant to accept Chase Elliott as the new number 24. During a qualifying session, she encountered the two drivers sitting on a wall watching the cars. She took photographs of the two with the exact same expression and posture. “Those are my favorite.” Shelly also uses the bi-annual race as an occasion to feed the workers at the campground she stays at every year. She prepares her spaghetti recipe with homemade sauce. “It’s who we are…. And they are so good to us… Bristol is neat because it is a big, extended family.”

Through dedication to drivers, the track, and the sport itself, fans find themselves at Bristol Motor Speedway. Each race brings a new possibility of crashes and wrecks, wins and losses. Weston, almost four, is a first time fan at the race. He visits Food City Family Race Night with his twelve-year-old sister Olivia, his aunt, and his two grandmothers. He refuses to stand still as he waits for his photo opportunity in front of the “It’s Bristol Baby” sign that graces the front entrance. “We like smelling racing fuel and burning rubber[,]” his grandmother remarks. His aunt speaks like many that has attended BMS since its construction in 1961. She replies, “Fans have a good time…Can’t beat it.”